From The Executive Producer

As we enter our 15th year, it is a privilege for the Salt and Light Catholic Media Foundation to present to the world “The Francis Impact.” We were privileged at the beginning of Pope Francis’ ministry to present to you “The Francis Effect” – a major documentary that has been recognized around the world as an important window and interpretative key into a remarkable papacy that was unfolding before the eyes of the world. Over the past four and a half years, we have accompanied closely Pope Francis around the world and witnessed up close his powerful gestures that have become the substance of his Petrine Ministry. Not only the Church but the entire world has been touched, captivated, moved and challenged by this man who was called to Rome from the ends of the earth to be an agent of change, a bearer of mercy and hope, a messenger of peace, a disturber of conscience and a brother to millions of people.

What are his most important achievements of the past five years? There are those who would focus on internal matters of the Church. To be sure, he has rebranded Catholicism and the papacy. But many others would focus on his impact upon the world – on those outside the Church who find in Francis a credible, authoritative, moral leader who has called forth our better angels and invited millions of people to become the change they wish to see in the world.

In Pope Francis, we have a courageous and prophetic leader who is concerned about the environment, about world peace, mercy, compassion and love. We have a Gospel-inspired shepherd who has a deep passion, care and concern for the poor and for millions of displaced peoples roaming the face of this earth. We have a leader who has had a deep and lasting impact on humanity at this moment in history. This new, Salt and Light documentary is our way of sharing Pope Francis’ impact on the world. For all that has been for the past five years, we say: “Thanks.” For all that is yet to come, we say “Yes.”

For more about the CEO of Salt and Light Catholic Media Foundation and Executive Producer of The Francis Impact, visit Salt + Light 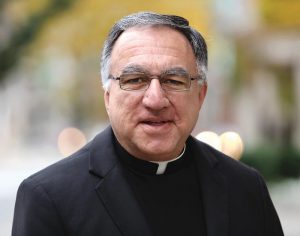