“I tell you what I see.” I say this sentence and keep walking quickly reflecting on what a middle aged man from Lampedusa told me in Italian and dialect. I do not know what he refers to, nor do I wonder what his problem is. I will just communicate the reality of what I see with my own eyes and without filters. 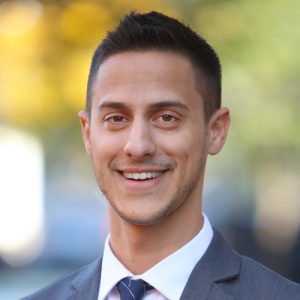 A few meters later the dock becomes a pier and the ships are ready to go. My colleague Peter, who is the cameraman, and I get on the Carabinieri boat, which in addition to the Coast Guard and others, will shortly navigate a few miles away from the port to the real commemoration.

It is October 3rd, shortly after 11 o’clock as Lampedusa prepares to live its most touching moment. The procession has reached the Door of Europe, a structure made by Domenico Palladino, and comes down again ready to go wide.

Although 4 years have passed, the memory of 368 deceased migrants is still alive, not just in words or through celebrations, but present in the most concrete sense of the word. A boat carrying authorities and a parish priest leaves the dock, with Carabinieri following them.

The sea is calm, despite the previous night’s wind and rain.  The only waves are the ones that rise as a result of the boat’s route.

After, fifteen minutes of journey and at the shipwreck point of October 3, 2013, all boats try to find an equilibrium in order to create a circle. The operation takes a few minutes to execute. After prayer and a brief speech, a wreath of flowers is thrown into the sea in memory of the victims.

Boat sirens begin to play at the same time, the whistle almost deafening in unison and undoubtedly this is the most touching moment of the commemoration. 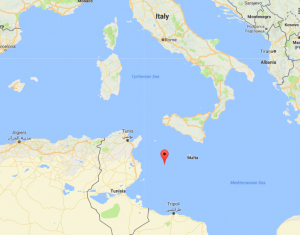 In the sounds that grow louder and louder, I imagine the cries of pain of those who tried to save themselves or try to do so today.

The wreckage has never been recovered and a recent report from “La Stampa’s” website states that from January 1st, 2017 until the end of September of this year, there are 2,655 dead and missing in the Mediterranean.

In 2014 UNHCR, the UN refugee agency, defined the crossing of the Mediterranean Sea as the “deadliest road in the world”.

Water and blood. This is the picture that comes to mind most often during these five days in Lampedusa. It is a phrase I heard by chance a few days ago in reference to South America, and still remains in my mind. I think of how it perfectly suits Lampedusa as well. Water and blood travel uninterruptedly around Lampedusa. UNHCR and IOM confirm this combination, estimating that since October 3rd, 2013 until today, 15,696 migrants have died or are missing at sea.

It is not easy to speak about Lampedusa and its connection with the perpetual crisis of migrants. The biggest risk is to derail to rhetoric or to label good and bad people. The only way to gain a better understanding is to talk to locals and let them explain what it means to everyone in Lampedusa.

Francesco Tuccio is a carpenter, but simply defining him so is perhaps unjust. Artist-carpenter makes more sense, especially if you observe the works he produces along with his famous wooden crosses.

At the end of a little street, exiting the historical district, lies his laboratory. Numerous objects that have been ordered, are shipped out from the warehouse and sent to their destination in every corner of the world.

His crosses are obtained from the wood of boats that arrive in Lampedusa. They are  unique pieces of craftsmanship made with his hands which have brought to life the pastoral work used by Pope Francis in his historical visit to Lampedusa on July 8th, 2013.

Mr. Tuccio tells us about his activity and also about the popularity that has touched him unexpectedly.

“Everything started in April 2009, a few days after the terrible earthquake in L’Aquila, when many migrants lost their lives a few miles from Lampedusa. Newspapers and TV gave little attention to this disaster, talking only about the rubble in Abruzzo, while another tragedy in Lampedusa left lifeless bodies at sea”.

Tuccio describes those days and his pain. A feeling caught between two tragedies and accentuated by the little emphasis given to what happened in the Mediterranean.

During those days, walking along a small beach not far from the airport, he started to collect what the sea had brought to shore. Among them were pieces of wood, remains of what once were a boat.

Creating a cross, the easiest object to assemble, became his way of dealing with the  torment. The cross is a symbol of death but also a symbol of the resurrection. Two pieces of wood, with not much work done to them, were criss crossed to convey what happens after this life.

His activity began to attract the attention of his fellow citizens. Moreover, Tuccio’s objects quickly became famous and were in demand all over the world. In fact, as of  December 2015, The British Museum in London has on display a 35cm tall cross created by Tuccio’s very own hands.

Yet, what I perceive of Lampedusa is an atmosphere of peace. Often quoted,  it is an island suspended between Sicily and Africa where life flows serenely. One can breathe in the air of the South, and the scent of the seafood that comes from the restaurants.  There are so many gelato shops that tourists are unable to resist.

I do not know what a foreigner can expect here, but I am tempted to imagine illegal immigrants around the town. It is such a trivial and easy thought, but is immediately dismissed because the reality is quite different. The only people we came across are few survivors or victim’s family members who came to Lampedusa for the commemoration. The rest are simply locals and many tourists who are taking advantage of the sun and beaches as if it was early August.

“Lampedusans have a different relationship with migrants, unlike other Italians”. I hear this phrase in different circumstances and I try to deepen my understanding of the differences that I suppose should not be so subtle.

Mr. Tuccio, and also Paola La Rosa, of the “Lampedusa Support Forum”, explain to me that seeing someone who arrives exhausted after days at sea, and touching hands  with survivors who endured an inhumane crossing, is an experience that inevitably changes one’s approach. Direct contact takes away barriers and creates empathy, while awakening humanity in each of us and gives life to a different relationship. This is a welcome that can not be denied to those who risked their lives for days escaping the persecution and drama.

This is the real difference: seing and touching. These are different perspectives versus  reading reports or watching news videos.

That is the reason why the Lampedusans emphasize diversity and explain their approach. Paola La Rosa, with her association, welcomes migrants at the pier.

Needs are met such as hot tea or blankets, but above all the welcome brings a physical presence and perception that someone is on the other side waiting to receive those who arrive.

Another aspect of the Support Forum is to give identity to lifeless bodies, a process that sometimes is long and almost impossible to accomplish due to lack of information and difficulty in finding them after time has passed.

Paola La Rosa, however, recounts the commitment to this work and the desire to give dignity and burial to those who failed to arrive or to save themselves. She reaffirms that: “An unnamed tomb does not even create empathy, nor can the pain can be felt”.

I reflect several times about this concept as I walk around the cemetery of Lampedusa, a few meters from the airport, where landings are of a different nature every day.

It’s a connection that comes to me almost automatically, as I think of this wonderful island, where all the shades of white and blue seem to be projected onto the sea.

This island is the southern most point of Italy, the gateway to Europe, and lies between welcome and despair. It is where hope sometimes collides with death and water mixes with blood. It is a place that is different from the rest of the country, where you can leave your car unlocked and the keys in the ignition because “Where do you think people can run away to?”

This is the island that in June 1943 was where the “Corkscrew Operation” took place, where the allies won Pantelleria and the Pelagies, as fundamental territories in view of the great landing in Sicily.

Lampedusa is its own small world, and a continental border where I saw with my own eyes what I often watch on TV and where once again I came to the conclusion  that journalism is something which has to be seen and felt.